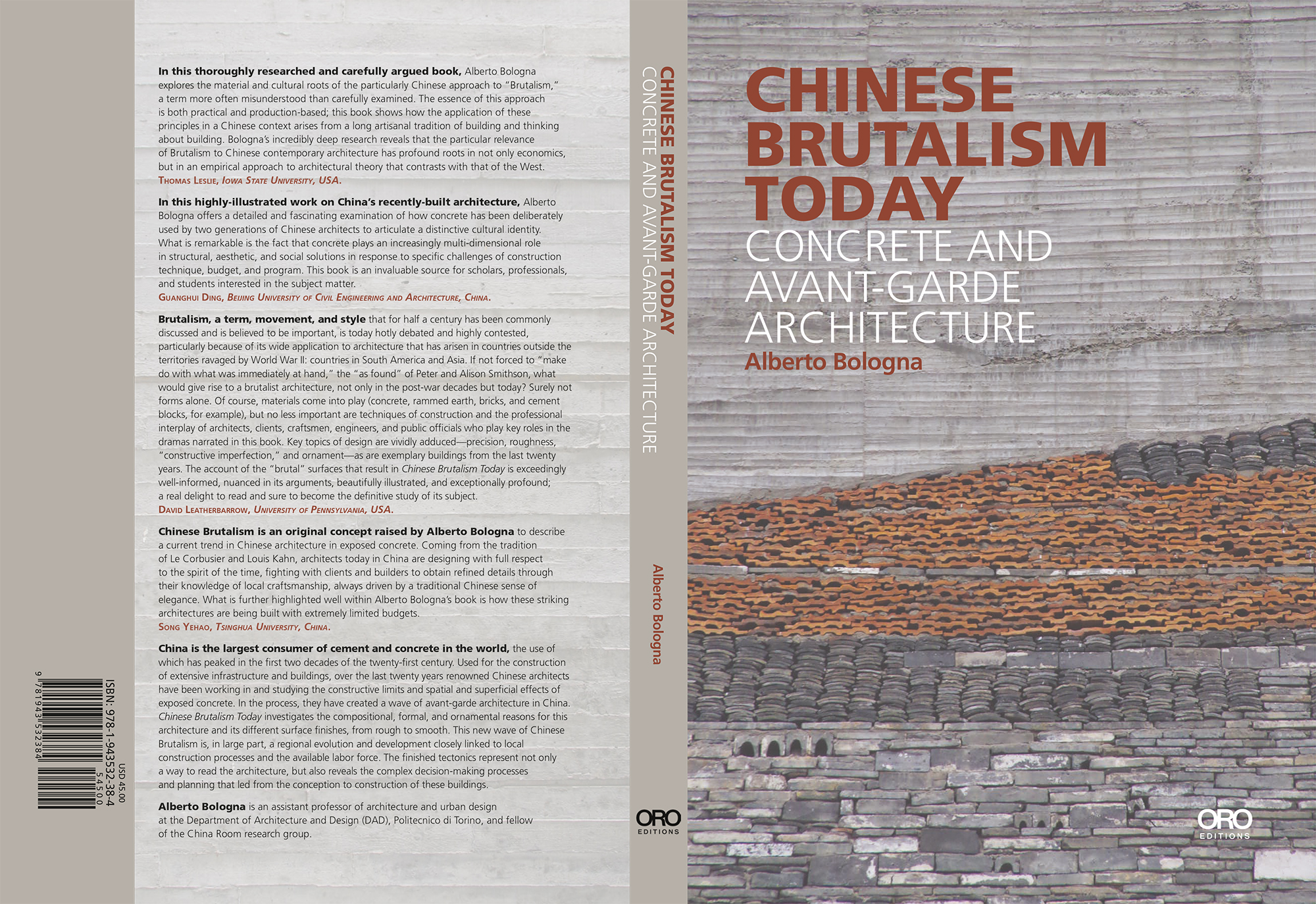 Alberto Bologna’s new book Chinese Brutalism Today. Concrete and Avant-Garde Architecture (ORO Editions, San Francisco, ISBN 978-1-943532-38-4) is out. A research work carried out in the past two years among Turin and Beijing, profiting of the several research and teaching periods spent by the Author at Tsinghua University, supported by the Department of Architecture and Design (DAD), to the Internationalisation Area (INTE) and to the China Center of the Politecnico di Torino.

The choice of the subject of the volume was determined by the Author’s interest in the existing relationships between tectonics, architectural design, and built space, a research theme already declined in his previous publications.

300 coloured pages – accompanied by 342 images among photos, sketches and drawings (127 are shots by the Author) of significant contemporary Chinese exposed concrete buildings – host three chapters (Exposed Concrete in The Design Process / Identity Search: Towards an Ornate Surface / Global Ambition: Towards a Polished Surface) and a methodological Afterword (Critical and Operational Tools for the Construction of Research: Tectonics as a Tool for Dialogue Between Two Cultures). In the opening, the Author’s text is introduced by a Foreword written by Pierre-Alain Croset, titled Dialogic Criticism for Contemporary Chinese Architecture.

Beyond the presented architectures – many of them are completely unknown for the Western audience – the book has been written also with the aim of focusing on a series of critical analytical tools on the ways in which architectural design is practiced today in China, from the first phase of formal and spatial translation of the architect’s creative impulses to their transposition into the built work. The aim was to understand the essence and reasons for a certain way of making architecture in China today, understanding formalisms not as the outcome of the investigation process, but as the starting point through which to set up a backward dialogue between architects and technicians with different backgrounds and approaches.

China is the largest consumer of cement and concrete in the world, the use of which has peaked in the first two decades of the twenty-first century. Used for the construction of extensive infrastructure and buildings, over the last twenty years renowned Chinese architects have been working in and studying the constructive limits and spatial and superficial effects of exposed concrete. In the process, they have created a wave of avant-garde architecture in China. Chinese Brutalism Today investigates the compositional, formal, and ornamental reasons for this architecture and its different surface finishes, from rough to smooth. This new wave of Chinese brutalism is, in large part, a regional evolution and development closely linked to local construction processes and the available labor force. The finished tectonics represent not only a way to read the architecture, but also reveals the complex decision-making processes and planning that led from the conception to construction of these buildings.